The Grand Canyon National Park is one of the most popular natural attractions in the United States and brings in hundreds of thousands of tourists ever year. It’s a truly magnificent sight that everyone visiting the country should strive to see at least once.

It’s also in one of the harsher areas of the United States, meaning that although it’s worth visiting at any time, there are some preparations that can be made to make the experience that much better, as we’ll explore below.

Choosing When To Visit

Most people will visit the Canyon during the summer months, partly because it makes for a better view, and also because this is when the schools are out. The problem here, however, is that bookings can be fairly difficult to attain, and the large crowds can make it difficult to get great views of the scenery. It might be a better idea to instead aim for the colder months, such as between March and May, where there will be less of a crowd, booking will be much easier, and the weather will be cooler.

The Grand Canyon offers a multitude of incredible hikes that can go on for many kilometres. One of the most well-known is the Rim Trail, which runs along the South Rim of the Canyon. It’s an easy hike for most people and is even accessible for those that have to use a wheelchair. Another common hike in the South Rim area is the Bright Angel Trail, which has been maintained well by rangers and also offers a few resting spots along the hike, with shade to escape the worst of the sun. Many of the hikes offer a scenic way of getting to the bottom of the canyon, but it’s important to check which is which, as there are a few that can take more than a day to complete and require more preparation. 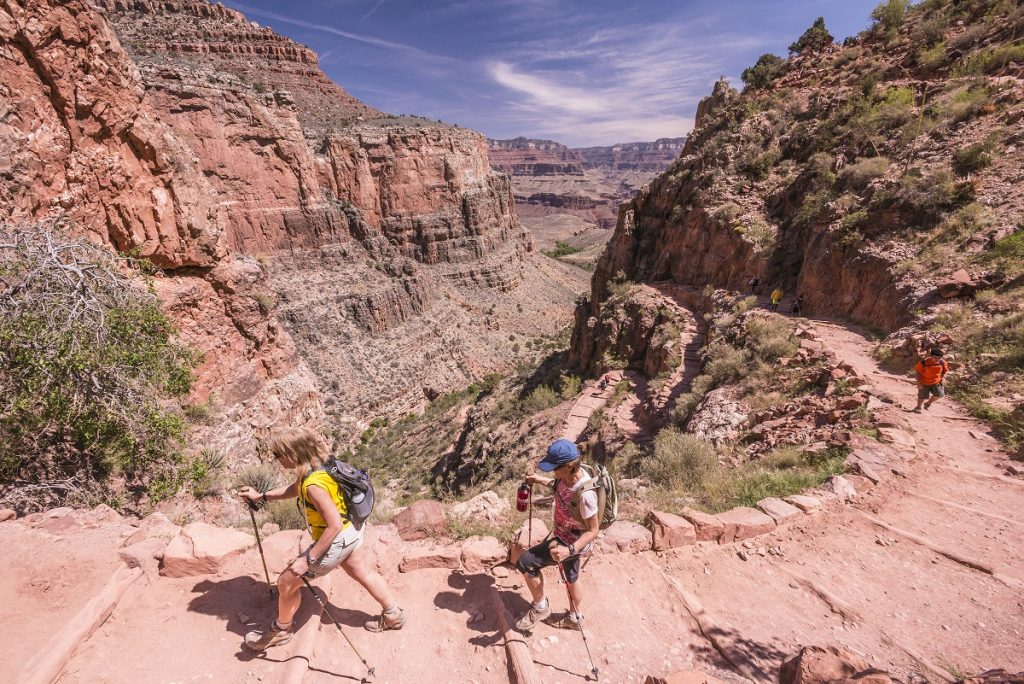 Other Methods Of Transportation

Hiking isn’t the only way of getting around the Grand Canyon. Mules rides are also a very common method of seeing all the sights, along with taking a raft down the Colorado River, which is a special favourite for those that want to travel down and camp further down the river, with campsites that boast some of the most unforgettable night skies in the USA, a great place to spend some time playing with friends.

Mules have long been the transportation of choice for visitors of the canyon, as they tend to be much more proficient at climbing the steep rocks when compared to horses. They can also carry more weight, making them a good choice for picnics and when reaching a destination at the bottom of the valley.

The Grand Canyon is located in a desert, and temperatures can soar during the hotter months, so it’s important to always have enough water around. The park offers water stations throughout, so it’s possible to refill on water by making use of a reusable water bottle.

Why Everyone Should See The United States