Theme parks are a staple in every adrenaline junkie’s diet, and America is not just the land of the free and the home of the brave – it is also home to plenty of theme parks! Each one is unique and has something thrillingly different to offer. Here, we will take a look at some of the best theme parks with the wildest rollercoasters on offer throughout the country.

Located in Sandusky, Cedar Point is renowned for having some of the most frightening rollercoasters in North America. The theme park is home to the Millennium Force, which stands at an astounding 310 feet tall. The ride’s designers came up with an entirely new category designation for it: the Giga-Coaster. The ride reaches an incredible speed of 150 kilometres per hour, making it one of the fastest coasters in the world. Other rides at the park include the launch coaster, Maverick, as well as the Steel Vengeance, which was previously known as Mean Streak. The former wooden rollercoaster recently got a hybrid wooden-steel makeover. It also features a 200-foot, 90 degree drop and a top speed of 120 kilometres per hour.

The New Jersey arm of the Six Flags brand has plenty to offer. Aside from hosting several events a year and being famed for its month-long Hallowfest Halloween party, Six Flags Great Adventure is also home to El Toro. While El Toro is not nearly as fast or as tall as any of its counterparts, it does offer riders plenty of airtime. El Toro offers more extreme airtime than possibly any other rollercoaster in the United States. In addition to being one of the country’s most thrilling coasters, the New Jersey-based ride is also known for being one of its wooden best coasters.

King’s Dominion in Doswell, Virginia offers its visitors a little something for everyone. The rides designed for children are mainly themed around the Peanuts comics. However, the theme park’s very own Giga-Coaster is themed after the NASCAR legend Dale “The Intimidator” Earnhardt. Called Intimidator 305, it is just a few degrees short of a straight shot drop. This drop is followed by rattling G-forces once you reach the bottom. The ride also features element such as abrupt changes and overbanking turns to make the experience feel even more wild. If you’re not into high adrenalin rides, you may want to give this one a skip and play money games on your phone instead.

Carowinds in Charlotte, North Carolina, is well-known for serving up some of the most delicious foods to its visitors. From funnel cakes to slow-smoked barbeque pork ribs, the theme park offers plenty of North Carolina’s finest dishes, all prepared by well-trained chefs. 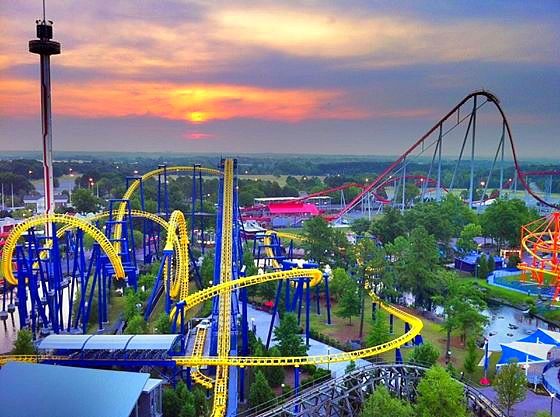 If you are planning a trip there, however, perhaps indulge in the foods only after you’ve had your turn on the Fury 325 rollercoaster. At a height of 325 feet, the ride reaches speeds of over 150 kilometres per hour. Built by Bolliger & Mabillard, Fury 325 is also quite steep, at 81 degrees. To add an extra scary element, the ride includes a dive into a tunnel underneath Carowinds’ entrance path.

The Beauty That Is Maine